A “one of a kind” building Styles: Byzantine, Italian Romanesque, Lombardic, Spanish 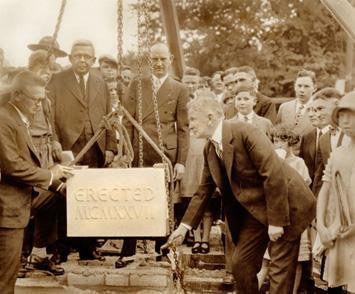 The Mission Revival movement was born in California and was the first style to be exported from west to east, not vice versa. It was distinctly Californian in character and marked a historically transitory time. According to Karen Weitze, author of California’s Mission Revival, the movement was born in 1885 when Leland Stanford combined the adobe style Franciscan Missions of California with a “higher form of architecture” known as Richardsonian Romanesque, to create a unique style for the campus of Stanford University, Palo Alto was identified as ‘peculiarly Californian.’

Westminster’s architect, Charles Dean, similarly drew inspiration from a “higher form of architecture” combined with the Franciscan Mission style to design what he considered his finest building. The Byzantine style basilica Hagia Sophia in Istanbul was Dean’s inspiration for the shape and form of the sanctuary dome, but the construction elements are from the Arts and Craft period. The American Arts & Crafts Movement found inspiration in the California Mission Revival movement. According to Weitze, “Regionalism, environmentalism, integrity, harmony, simplicity and sincerity – the Arts and Crafts linked each with the Mission Revival.”